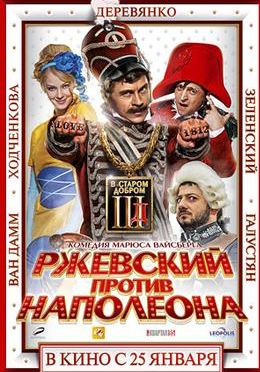 Life’s struggle is never-ending, which is everyone needs a good laugh every now and then and in one way or another. With that, it’s no wonder that comedy films have become vital in the entertainment industry, making us smile and giving us a moment of relaxation through hilarious antics, plots, situations, and characters. Comedy flicks provide an opportunity to look at humor in life, take things lightly, and possibly expand our horizons and be a genuine, optimistic person.

About Rzhevsky Versus Napoleon

“Rzhevsky Versus Napoleon” is one of the comedy films that grazed Russia’s silver screen in 2012. It is a sequel to the 2008 comedy movie, “Hitler Goes Kaput!”

Both films were directed by Maryus Vaysberg or Marius Balčiūnas-Weisberg, a Russian film director, screenwriter, and producer, with Jewish and Lithuanian roots. The movie was produced by Central Partnership and was released on January 18, 2012, and featured some of Russia’s most famous celebrities, such as Volodymyr Zelensky, Pavel Derevyanko, Svetlana Khodchenkova, Mikhail Galustyan, Marat Basharov, and Ksenia Sobchak. 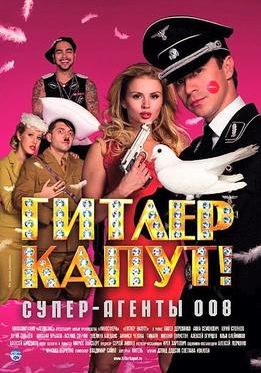 “Rzhevsky Versus Napoleon” story happens in Russia during the onset of the 19th century. Napoleon Bonaparte’s (Volodymyr Zelensky) army is victoriously expanding their control after capturing Europe and Moscow. Napoleon Bonaparte’s subsequent goal is to conquer St. Petersburg, the cultural capital of the country.

General Kuzotov’s (General Kutuzov) Russian army is no match to the stronger and well-prepared French army. However, the general knew one significant way to win over his counterpart. Napoleon is a ladies’ man, blessed with incredible skills in attracting women. In fact, no single woman misses Napoleon’s charm. In return, Napoleon also easily gets swept away and distracted from his master plan to bring the world to his knees.

General Kuzotov acknowledged the idea that a genuinely mesmerizing woman yet harder to get and will not give in to Napoleons’ appeal can throw off a challenge to the French emperor. Thus, sidetracking Napoleon’s plan to seize Russia while buying Kuzotov’s army time and eventually combat the French troops. The question is, where to find suck kind of woman?

General Kutuzov exhausted all his connections to look for the best candidate but to no avail. Ironically, Russia has its own tempter, like Napoleon, in the persona of Lieutenant Rzhevsky, but is in jail, serving a life sentence for his encouraging sexual revolution. As Rzhevsky is deemed to have the same prowess in seducing women, General Kuzotov offered him a wild yet might be a fruitful plan of acting as a woman and charming the French emperor. In exchange, Rzhevsky will get his freedom. All things seemed to go smoothly, with Rzhevsky brimming with self-assurance. However, Miss Moscow 1810 Natasha Rostova, Rzhevsky’s dream woman, entered the pictured, ruining all the plans as the lieutenant appears to value her more than his own freedom.

Who emerged triumphant in the battle of “Rzhevsky Versus Napoleon?” It is for you to find out. What’s certain at the moment is that we can expect more of these films humorous films to come in the coming years that will help us escape from reality and have us roll in laughter.