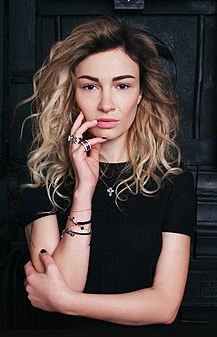 Anastasia Kostyantynivna Prikhodko, popularly known as Anastasia Prikhodko, is a Ukrainian activist, politician, and former singer-songwriter. In Ukraine and Russia, she is known for her deep contralto singing voice and a blend of pop and folk-rock music. She became famous after winning series seven of the Russian music competition FabrikaZvyozd (literally Star Factory). Prikhodko was a major figure during the Euromaidan and the pro-Russian unrest in Ukraine in 2014, expressing support in her home country and vowing never to perform in Russia again.

On April 21, 1987, Anastasia Prikhodko was born in Kyiv to parents Konstantin Rybalov and Oksana Prikhodko. Her father is a Russian who worked as a miner, while her Ukrainian mother works as a theatre critic for the Ministry of Culture in Ukraine. Her parents separated, and her mother raised her while her father returned to Russia. Prikhodko has Japanese ancestry, as she has a Japanese great-grandfather.

Prikhodko has an inclination to music, as she attended the R. Glier Kyiv Institute of Music and Kyiv National University of Culture and Arts to study folk vocals. She also collaborated with his elder brother Nazar in music.

Prikhodko began her music career in 2005 and first experienced mainstream success in 2007 after being cast in series seven of FabrikaZvyozd, a Russian talent competition. She continued to advance through the competition until she was declared the winner in the finale.

After winning, she was signed to a contract by Ukrainian music producer Konstantin Meladze, a frequent guest on the talent show. She released several singles in 2007, but none of it managed to gain mainstream success. In 2008, Prikhodko released the single “Bezotvetno,” which went on to become her breakout hit. The single reached the top 40 in Russia.

Prikhodko participated in the Ukrainian national final for the Eurovision Song Contest 2009, competing in the non-televised semi-final in 2009. It ended with controversy, and Prikhodko instead applied for the Russian national final. In the finale, she performed the song “Mamo,” a bilingual song in both Ukrainian and Russian languages, giving her a win in 2009. After her win, some people complained about a song in the Ukrainian language representing Russia in an international competition. Nevertheless, she remained as the Russian representative in the Eurovision Song Contest that year in Moscow.

After her Eurovision stint, Prikhodko cut her professional ties with Meladze in 2010. She began working with another producer Igor Goncharenko and worked with her older brother Nazar. Later that year, she entered the Ukrainian national final for Eurovision Song Contest 2011. She sang a techno song in English, departing from the folk-rock music genre she was known for. She landed the eighth spot in the finals. Later in 2011, she released her debut studio album Zazhdalas.

Prikhodko is known as a folk vocalist with a deep contralto vocal range. The genre of her songs includes folk-rock, pop music, techno, and similar genres. She performs in Ukrainian, Russian, and English. Many of her first songs were in the Russian language, and she began incorporating Ukrainian eventually. In 2015, after swearing off performing in Russia, she also did not sing again in Russian. She composes some of her music herself but often collaborates with different producers and songwriters.

Prikhodko can play the guitar, piano, and flute. She pays close attention to criticisms of her work, often trying to improve herself based on the criticisms of others.

In 2014, Prikhodko was active in the 2014 Euromaidan demonstrations. She became an outspoken advocate of Ukrainian sovereignty and its liberty from Russian influence. During the Euromaidan, Prikhodko performed at the MaidanNezalezhnosti and openly spoke in favor of the European integration of Ukraine. She also went on to support the Ukrainian Ground Forces during the War in Donbass by touring with other Ukrainian musicians. She accused Russia of illegally occupying some Ukrainian territories and vowed never to perform again in Russia.

While being active in protests, Prikhodko continuously stated that she is not interested in pursuing a political career. Instead, she preferred to work as a musician and an activist. But in 2018, Prikhodko announced her retirement from music in order to enter politics.

That same year, Prikhodko revealed that she joined the “Fatherland” political party led by YuliaTymoshenko. In 2019, she ran for parliament as a member of the Fatherland party and stood for election in one of the Ukrainian electoral constituencies. Prikhodko stood in the eleventh electoral district of Vinnytsia and failed to land a seat in the parliament. However, she did confirm that she will still remain politically active and might seek office again in the future.

Prikhodko is a mother of two. She had a daughter with her ex-husband, NurikKukhilava, an Abkhazian businessman. They first split up in 2011 and later divorced in 2013. She married an ex-schoolmate whom she known from childhood in 2013 and had a son together in 2015.