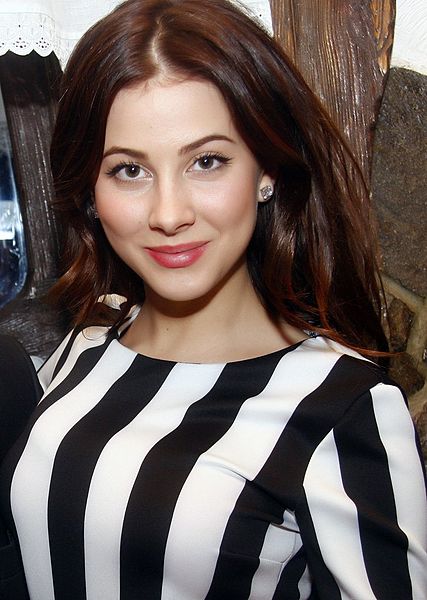 Anastasia is a 27 years old Ukrainian singer. Born in 1993, she is known for being one of the soloists in the popular pop group called “VIA Gra.” She remained with the group from 2013 to 2018. She is 5 ft 5.75 in tall and has brown hair and emerald green eyes. In 2015, Kozhevnikova was awarded the 95th place in the list of the “Sexiest Women of the Planet” by the English magazine FHM.

Anastasia Kozhevnikova was born on March 26, 1993, in Yuzhnoukrainsk, Ukraine. Her full name is Anastasia Dmitrievna Kozhevnikova. She was born to an artistically and musically inclined family with her father and grandfather both being photographers, her mother, a choral artist, and grandmother, a piano teacher. With the love of music and art inherited in her genes and running in her blood, it was only natural that she would pursue a successful career in music.

However, for Anastasia, success did not come easy or without her share of hard work. She had joined the children’s choir “Droplets” when she was six years old. At eight years old, she started studying at a music school and also took part in choreography and acting. She also performed for the Galatea Theater. Her early performances in children’s competitions, like “Young Galicia” and “First Swallows,” did not bring her much success.

When Anastasia was 16, she was selected for the show ‘Superstar,” but could not make it in the show. She also auditioned for the X Factor and made it to the first round, after which she dropped out. In 2011, Anastasia started studying at the Kyiv National University of Technologies and Design. During this period, she worked at a pet shop and also handed out flyers.

She also won the Miss KNUTD beauty contest in 2013. Due to her career with VIA Gra (more on that below), Anastasia could not complete her university education on a regular basis. However, she did receive a bachelor’s degree.

Anastasia spent five years as a singer with the girl band Nu Virgos (also called VIA Gra). VIA Gra is a Ukrainian music band that debuted in September of 2000. It started as a duet but had become a trio by 2002. The group has had a strange trend: its singers have constantly been leaving and being replaced by new ones, such that it became a challenge for people to remember the group members at a given time.

Singers have had to leave the band due to diverse reasons, from pregnancy to conflicts within the team to start a solo career. However, new singers have always been eager to replace old ones.

An interesting thing about the brand is that when performing internationally, it cannot use the name “VIA Gra,” as there is a danger of a lawsuit from the manufacturer of the drug “Viagra.” Thus, when abroad, the band performs under the name “Nu Virgos.”

In the year 2012, the creators of VIA Gra launched a project called “I Want to Be in VIA Gra.” This was going to be a reality show, the winners of which would become the latest members of the band VIA Gra. Out of hundreds of applicants from all over the country, eighteen talented girls were chosen. Their performances were judged by a jury pool that included six of the past members of the VIA Gra music band. Anastasia was one of the girls cast in the show.

Anastasia sang the song “Unrequited” in the first round, then performed with  D. Shimanovskaya and E. Pishchikova. Her remaining performances were as part of a group, with Erika Herceg and Misha Romanova. The girls almost lost the right to be part of the project when the co-producer of the show, Meladze, was angered because they had cut off their dresses before giving a speech, an act he thought vulgar. However, they were luckily able to remain part of the project.

In 2013, Anastasia, along with her group members Erika and Misha, won the show. As the new face of the VIA Gra, they then released a single and music video called “The Truce.” In the same year, the group performed at the concert “We Are United” in Kremlin. Anastasia, Erika, and Misha also went on a tour. Their success rested on new singles, as well as on singing modified versions of seventeen old songs.

Anastasia and Erika and Misha also did a photo shoot for the men’s gloss XXL. The girl band has had its fair share of success. The music video for their song “I Have A Different One” was viewed by 10 million people on the ELLO internet portal, and the song was ordered the most that year. The song “Truce” received an award for its composition at the Russian “Golden Gramophone” ceremony.

For their song “Oxygen,” Anastasia Kozhevnikova and her band received the “Muz-TV Award.” For the group VIA Gra, this was the tenth award. In July 2015, the music band released a new album called “All the Best in One.” The album has 24 songs and was followed by videos for the singles “It Was Beautiful” and “So Much.” The song “Who Are You to Me?” was released by the group in 2016 and followed by a video. Their last work is “My Heart Is Occupied.”

After working with the music band for five years, Anastasia decided to leave the group when her contract ended in September 2018. She officially stated that she wanted to explore her strength and follow her own path.

In 2019, she released “Universe,” her third single in her solo career, which was a special song because she tried to convey the feelings of the moment of intimacy, which she describes as a magical state. Her solo career as a singer is thriving.

Before the reality show “I Want to Be in VIA Gra,” Anastasia was in a relationship with the photographer A. Ibragimov. Ibragimov was very supportive of Anastasia and used to accompany her to castings, but they broke up at the start of 2014. Officially, the breakup is attributed to Anastasia’s tight schedule, which did not allow the couple enough time together.

It was first reported that Anastasia was going to marry a guy she knew from the ninth grade. She and her boyfriend had not decided on a date for the wedding yet, because they were more focused on building their home. She married Kyrylo Snytkov in 2018.

After a successful career with the VIA Gra, Anastasia is now emerging as a solo female singer in Ukraine. This is just the beginning of the solo career of the 27-year-old singer, and a lot more is to come.